For the past three years, this plant has driven me crazy: 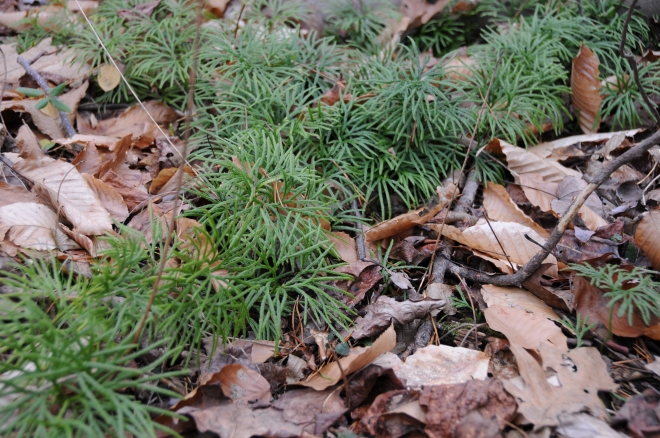 A really cool groundcover plant! What is it?

It grows all over Burke Lake Park, where I frequently take walks, and is especially evident at this time of year, when all the forest undergrowth has lost its foliage.  A couple of years ago I clipped a piece to take to my plants teacher at GW, in the hopes that she could help me ID it, but I lost the piece before I could show her.  Doh!
Anyway, a couple of weeks ago — thanks to my mad skillz with Google Image Search — I finally figured out what it was!
It’s a club moss!  Specifically, it’s Lycopodium digitatum (literally “Wolf Foot Fingered”) and this particular species of club moss has the common names Running Cedar, Fan Club Moss, and Southern Ground Pine.

Like all party animals, Club Moss likes to congregate in colonies

So what exactly is a club moss?
I’m so glad you asked, because I just looked it up on Wikipedia.
Club moss is not actually a true moss.  True mosses are non-vascular, which means that they have no stems and no way to transport water and nutrients.  Imagine having no veins — rough!   True mosses cling desperately to the ground, surviving on a diet of dew and butterfly kisses.  They don’t get out much.
Professional botanists like to say that true moss is the Jan Brady of the plant kingdom.
In contrast, club mosses are fully vascular, which means they have stems and roots, and can pal around with other vascular plants like ferns and oak trees — i.e., the groovy kids on campus.   Club moss is Marcia Brady.
However, just as Jan and Marcia have similar reproductive systems, so do moss and club moss.  They both reproduce via sporophytes (literally: “yellow spiky thing”) shown here: 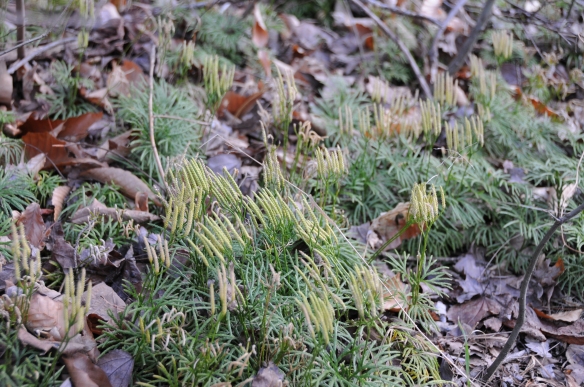 The sporophytes are really cool because when you flick one with your finger it produces a little puff of yellow smoke — millions of spores!
Wouldn’t it be cool if humans could reproduce like that?
Lycopodium digitatum is a beautiful little evergreen groundcover, but unfortunately it’s nearly impossible to cultivate at home.  Even though they produce billions of spores, those spores need just the right warm, moist, shady spot in order to grow.  The only place you have like that in your yard is probably your armpit, so don’t bother trying to grow them at home.
But you can still admire them in your local eastern woodland.
P.S. To read more about mosses by a blogger who actually knows what she’s talking about, please look at Elisabeth Allison’s blog, The Garden on the Ridge.  Thanks for educating me about these plants, Elisabeth!

11 thoughts on “The Marcia Brady of the Plant Kingdom”