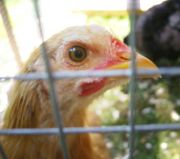 Chickens may not have big, sad eyes, but it's still a shame to see them homeless.

Turns out some people are as short-sighted about keeping chickens as they are about caring for traditional pets.  Some farm animal rescue organizations are receiving 10 calls a week from people eager to unload their hens and roosters.   This reminds me of how, a few months after the release of “101 Dalmations,” animal shelters received an uncommonly high number of Dalmation puppies who’d been impulsively purchased merely because they were darling Disney dogs.

Now, there is nothing wrong with Hollywood producing endearing family films about cute dogs, nor is there anything wrong with all the recent books, magazines, and websites devoted to the joys of chicken-keeping.   But can’t we pleeeease just be a bit more level-headed and realistic when it comes to animal ownership?

Chickens, like Dalmations, are not for everybody. And while I’ve no doubt they can bring great joy to the garden owner, a chicken is not like that cool new heuchera you spot at the garden center, that novelty purchase that you simply toss on the compost heap with a c’est la vie  if it doesn’t thrive in your garden.  Backyard chickens should not be viewed as garden ornaments or — like the Prius — some kind of eco-urban status symbol.

While it may not be desirable, it’s also not tragic to neglect your garden plants sometimes.  You, the gardener, may be angry or even heartbroken over the loss of that Sasanqua Camellia, but in the end, a neglected camellia is not the same as a neglected and unwanted dog, cat, or farm animal.

There is really no such thing as a low-maintenance pet.  They all require daily attention, and most likely, your affection.   They need to be fed and exercised and kept clean every single day.  Sooner or later they get old and sick and will probably cost you some money, maybe a lot of money.  So I hope that, in the midst of chicken mania, we will all please be wary about purchasing or adopting any life form with a heart and/or brain — even if  it’s a pea-sized brain.