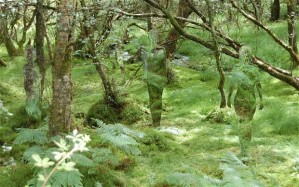 Thanks so much to all who commented on my last post, regarding the question of whether gardens and designed landscapes belong in the world of “art.”  Opinions were varied, with some suggesting that, “of course garden design is an art, you fool!” and others saying that they didn’t much care what sorts of labels were assigned to the practice of garden design, romping around in the world of semantics is for suckers, man.

But what came through loud and clear is the passion that so many of you have for the art (or craft if you prefer) of garden-making.

Before I move on from the issue, though, I want to throw a related question out there:

Should there be more serious criticism of landscapes and gardens?

This was a question I hadn’t thought about much until I read an article about “Bad Tempered Gardener” Anne Wareham, a British gardener and writer who thinks that we do way too much fawning over gardens that aren’t necessarily worthy of it.

I was intrigued by her take on the world of gardening (especially gardening media), which she believes is often patronizing, hypocritical, and childish.  Get this: Wareham has actually been censored by her publishers when she writes critically about certain gardens and designers.  The publishers feel that, not only could her opinions be seen as libelous, but also (gasp!) impolite.

Wow.  Can you imagine art, architecture, or food critics being told, “sorry, your review is just too mean; you might hurt some feelings”?

Now, I hate critics as much as the next gal.  All that parsing, scrutinizing, and condescension makes me nuts (at least when I’m on the receiving end of it).  But you have to admit that until an artform begins to attract the attention of serious critics, it is not taken seriously.  On the other hand, if a host of parasitic, bespectacled journalists descends upon one of your gardens, you know you’ve made it!  Even if they diss your design, their presence means they think what you’re doing is important; it means people are paying attention.

I do see some thoughtful criticism in Landscape Architecture magazine, mostly reviews of large-scale public or commercial spaces, but Wareham is right that most other garden/landscape design magazines are pretty lightweight.  Beautiful pictures, maybe even some good writing, but almost all of it descriptive rather than critical or controversial.

So beloved readers, I ask you to weigh in again!  What say you about this lack of “serious criticism” in garden design?  Do you agree?

30 thoughts on “Another Question For You!”