At least for my six-year old son.

When he first spied one of the chubby 3-inch long hornworms among the tomato foliage, he recoiled in horror.

Horror gradually turned to cautious fascination as he helped me find several other hornworms that were feasting on my plant. 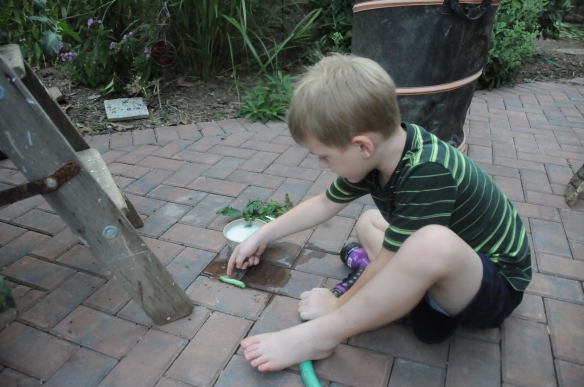 Five minutes later he was plucking them off by hand, studying them, getting to know them as individuals, naming them things like “Mr. Chewie” and “Spike”.

Then he happily ushered them into the Lepidoptera Afterlife by submerging them in tub of soapy water.

But of course, insect corpses are nearly as fascinating to a six-year-old as live insects, so the dead hornworms provided nearly two hours of amusement for my son as he continued to poke them, prod them, stir them into hornworm stew, and — my personal favorite — drape their dead bodies across my tomatoes and say “Mom!  I found some more!”

Not sure if my tomato plants will survive, but I figure if I’m going to lose them to some pest or other, at least the tomato hornworm provides some entertainment value.

Certainly more entertainment value (for a six-year-old) than a tomato salad…..