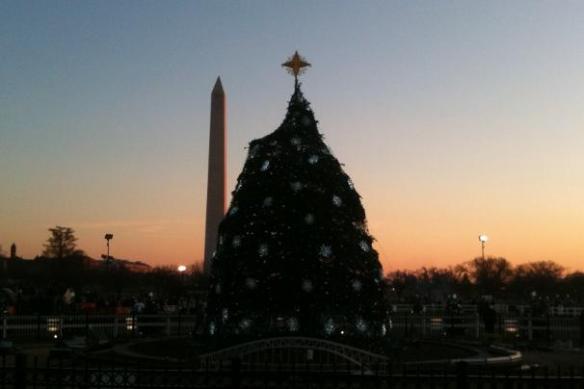 I saw this posted on a local news blog last week and was kind of intrigued.  The picture clearly shows an odd bump at the top of the tree, but I couldn’t find any explanation for it, nor could I find out if the bump is still there.

What do you think it is?  Is the net of lights just snagged on a branch, or could there be another explanation?  Maybe a witches’ broom has started to form?  An enlarged cone?  A goiter?

I read that this Colorado Blue Spruce — which replaced the one that blew down in February — came from New Jersey.  That could explain it.

One other thing.  Why did they choose another Colorado Blue Spruce?  They don’t grow naturally around here and they’re not all that.  I’m not a native plant  fanatic, but I think an Ilex opaca, American Holly, would have been a better choice.  They’re long-lived, they’re better suited to DC’s climate than Blue Spruce, they look Christmas-y and they’re beautiful all year long.

Instead we get this lumpy blue thing from Jersey!