Folks, it’s not too late to completely re-do your landscape for Halloween!

Whether your goal is just to have a little spooky fun, or to actually terrorize the children so they will not set foot in your yard, here are some “go-to” plants!

A couple of large Trifoliate Orange planted right alongside your front walk will really set the right sort of Tim Burton tone and show trick-or-treaters that you mean business. Should some naughty little ghost or goblin try to egg your house, the wicked thorns on this thing might ensnare the little culprit as he flees. Or at least catch a little piece of his costume that you could later use as evidence.

You can also break off a couple of thorns and (oops!) discreetly tear a hole in your neighbor’s ridiculous inflatable Caspar decoration.

2. Nepenthes rajah. I’m not saying it would be easy to get one of these Giant Pitcher Plants shipped in from Borneo and set up on your porch in time for Halloween, but wouldn’t it just be the ultimate? They say one of these plants can trap and digest a rat, which, when you think about it, is just about the same size as a child’s forearm….Hmmm….

3. Cedrus atlantica ‘Glauca pendula’ For some reason, people love the Weeping Blue Atlas Cedar. I’ve never really understood it. To me, this tree (if you can call it that) looks like some strange parasitic spider from an alien planet that slowly but tenaciously consumes whatever is in its path.

Some people say the young weeping cedars are “cute.” Yeah, cute like that girl from The Ring.

A few years later, you’ll have a full-blown horror in your yard:

For Halloween, if you have a Weeping Blue Atlas, I suggest placing a pair of false legs under it so that they’re half sticking out. Kids won’t think the plant is actually consuming a human being, but they won’t really be sure.

4. Actaea pachypoda What can you say about a plant that looks like disembodied eyeballs bursting out their sockets? If your answer is “meritorious!”, you are not alone. I was shocked to find that the Royal Horticultural Society has honored Doll’s Eyes as an official “Plant of Merit.” The plant, with those creepy white berries, is native to the eastern woodlands of North America (which is right where I live! ack!) but is also available in better nurseries, apparently.

I find that the plant also looks remarkably like Eye Guy, a villainous character from the old Mighty Morphin Power Rangers TV show. It is said that Eye Guy would capture children and had the power to suck out their intelligence. Does Actaea pachypoda have those same powers? Botanists say more studies are needed to know for sure.

5. Picea omorika “Pendula” Last up, another plant in the family Spookeae — the Weeping Serbian Spruce. Some people will say it’s only coincidence that this tree resembles the shadowy figure of Nosferatu, or they may claim that I spend a good while on the internet looking for just the right image, and then flipped it on its axis and changed the color to grayscale just to make it seem spookier.

I say the plant is just plain creepy, and in the dim light of All Hallow’s Eve, trick-or-treaters may even be frightened enough to skip your house altogether when they see this tree, which will leave you in peace to watch Cupcake Wars of DC without the doorbell ringing every 5 minutes, for God’s sake.

Before you get to work redecorating your yard, I just wanted to show you one more image. The house below is not far from me, and as you can see, the landscaping incorporates some of the spooky plants I recommend. 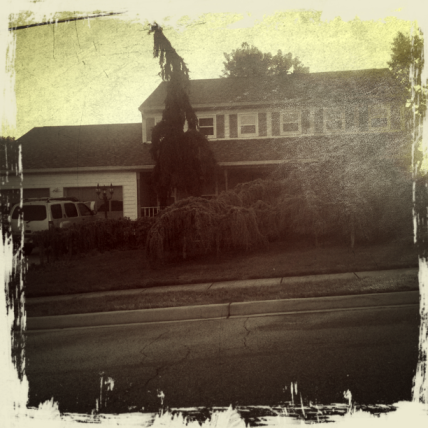 Would you send your child to this house? I think not. Even without the Vintique photo filter, it’s pretty damn frightening.

Happy Halloween, plant peeps! Here are some more posts from my Roundtable Comrades on the theme of “Danger Gardens” woooo……

Here is the link:

32 thoughts on “Garden Designer’s Roundtable: How to Terrify Young Children With Your Landscape”