The boxwood gods have always smiled upon me.  Despite what I’ve read about gardeners having difficulties with Buxus, every single boxwood I’ve planted in my garden has performed admirably while asking almost nothing in return.  (I only wish I could find such favor with whatever wrathful deities oversee Camellia and Viburnum.)

I have eight varieties of boxwood growing in my garden.  I know because I just went outside and counted them.  I have Buxus microphylla ‘Franklin’s Gem’, B. microphylla ‘Winter Gem’, B. x ‘Green Velvet’ as well as the five featured below.

One of my favorites is B. microphylla ‘John Baldwin’…what a jolly chubby fellow!  I have this guy planted in a teeny patch of soil between a brick patio and a screened-in porch and right now he is the only thing keeping that space from being a little wasteland of dead leaves and empty pots:

I have another ‘John Baldwin’ planted in rather heavy shade, under a black walnut tree, where he gets regularly peed on by a large Labrador retriever, and he just carries on without complaint.  What a star!

I notice that on a major growers’ website it says you can substitute ‘Dee Runk’ for ‘John Baldwin’ but I am going to have to raise a SERIOUS objection to that recommendation.  I also have a B. sempervirens ‘Dee Runk’ growing in my sideyard: 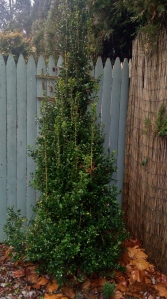 and I would say, yeah, go ahead and substitute her for ‘John Baldwin’ if you are also okay with substituting, say, Grace Kelly for Richard Dreyfus.  (Tip: not all pyramids are alike! Some are slim and lithe, some are dense and compact!)

I love all my boxwoods.  They are not flashy but they are stalwart.  They are like your friend who doesn’t throw a glamorous dinner party but who can always be counted on to give you a ride to your colonoscopy.  Stalwart & true.  They have color at the time you need it most.  In winter, when everything goes brown and gray, they retain rich shades of green, sometimes tinged with bronze and amber and orange, like this B. microphylla ‘Golden Dream’:

My ‘Golden Dream’ is planted under a cherry tree right by the sidewalk out front; it NEVER gets supplemental water, and it gets peed on by any number of neighborhood dogs.  Last winter a branch broke off under the 30 inches of snow we got in January; I simply tied it back on with twine and it soldiered on as though it hadn’t been brutalized by the one of the heaviest snowfalls in decades.

I tend to buy my boxwoods in small sizes.  They are said to grow very slowly but I have found that they usually grow a couple to as much as several inches a year. That’s good enough for me.  I’m only 45 and won’t be retiring to my villa in Provence until I’m at least 60, so I have time to watch them grow.

When you go to the garden center you can go to the boxwood aisle and, if you are the Queen of Sheba, pick up a fully grown boxwood for $249.99.

Or you can go to the one-gallon section and get the same thing in a diminutive version for $16.99.  I bought this teeny little B. sempervirens ‘Variegata’ last spring and planted it in a place where it will cheer me up on dreary, gray winter days.  It is only bringing me about 8″ worth of cheer right now, but in five years I am hoping it increases to 24-36″ of cheer in lovely shades of cream and green.

Here is another boxwood in my yard: 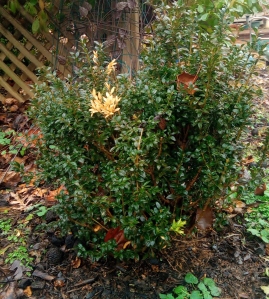 Notice anything different?  I bought this one at Home Depot.  It was relatively cheap for its size, and its label mentioned no specific cultivar — just generic B. sempervirens.  And although I still appreciate it for the splash (blob?) of green it provides in the winter garden, it is certainly inferior to the plants I bought at quality nurseries.  I think the difference is that it lacks any definite shape; in fact, Buxus ‘Amorphous Blob’ is probably an apt name for it.

Supposedly, boxwoods need “evenly moist, well-drained loam” but they DEFINITELY aren’t getting that in my yard.  Besides maybe Prince Charles and Martha Stewart, who actually has well-drained loam?  No, even though boxwoods are favored by royals and aristocrats, they will perform just as loyally for all of us peasants.

5 thoughts on “In Praise of the Boxwood”