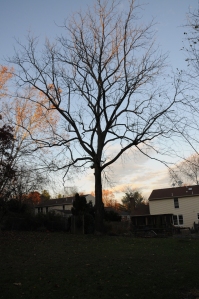 This Black Walnut dominates my backyard

Just what a gardener needs in her yard – a plant that kills other plants. Thanks to a toxin called juglone, present in all of its parts, the Black Walnut tree wages chemical warfare with many other plants that dare to grow near it – usually through the root systems. Some plants are more sensitive to juglone than others, and since I have FIVE Black Walnuts in my backyard (hence the name of my blog) I’ve done plenty of research about which plants can make friends with my Black Walnuts and which ones are doomed to certain death.

The trouble is, the lists of plants that are “juglone-tolerant” that I’ve found online and at nurseries are far from exhaustive. Usually these lists will offer only about ten perennials that have proven themselves tolerant of the Black Walnut’s toxins. These include hosta (yawn), daylilies (kill me now), and something called Toothwort, whatever the heck that is. Plus a couple of others – like Hollyhock — that need full sun, which you rarely find beneath a gigantic shade tree.

The other problem with these lists is that they often conflict with one another. For

Little patch of Robb's Spurge grows happily at the base

example, I’ve seen Betula nigra (the gorgeous River Birch) tagged as both juglone-sensitive AND juglone-tolerant. Since these lists are so unsatisfactory, I’ve been living dangerously and trying out plants that aren’t necessarily on the “safe” list. At the moment I’ve got epimediums, rhodea, and Robb’s spurge growing at the base of one of my Black Walnuts, with fothergilla, sarcococca, bamboo, cotoneaster, digitalis, heuchera, and carex all under the dripline, and (so far) all thriving.

I wish there were a better resource for finding Friends of the Black Walnut.  GardenWeb has a “Black Walnut Support Group” where gardeners share their successes with Black Walnut companion plants.  The info at GardenWeb is scattered among several different forums, but it’s a good start.